Tired of Being The Bad Guys? 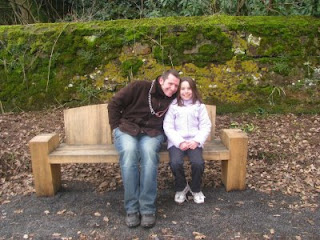 It was very strange indeed this weekend to be down to one child only. This is a picture of Youngest Child (for it was she) and Him Indoors, outdoors. The necklace Him Indoors is wearing, by the way, is the dog's lead, as she was roaming free at this point. I mention that just to establish that it is not true that I have Him Indoors on a lead, even a metaphorical one. Whatever he may tell you!

Anyway, Firstborn, Blue-Eyed Boy, and Penultimate Child had a lovely time at a Scripture Union weekend camp led by our aforementioned friend. There were six other kids from our church there (that makes nine altogether, as I'm sure you are able to work out) and three leaders from our church, including our church drummer. So the service back at the ranch was literally quieter without the twelve of them this morning.

I think it's fab that almost all the leaders (and there was a huge team of them as it was a big group of kids aged from 9 to 17) come on these weekends as volunteers, even though they have been working up till the Friday afternoon and have to go back to work (knackered) on the Monday morning. Their commitment to the kids and to God is amazing.

I was thinking today about a prisoner we used to have who came faithfully every week to the Prison Fellowship. He didn't often come to the services (which I conduct) but was regular at the Prison Fellowship meetings, run by a committed and wonderful and dedicated volunteer. This fellow (who eventually did a runner, but that's another story) was an atheist. He didn't believe in God and yet he came to Prison Fellowship because, he said, he couldn't believe that Isobel came in every week without being paid. He couldn't figure out why she would travel, as she wasn't local, at her own expense, in all weathers, and for the many years she'd been doing it, for no money. It impressed him and mystified him and so his curiosity led him to keep coming.

So much of the time people will say, "Religion just causes wars. If we didn't have religion we'd be much better off. Most wars are caused by religion. Religion's a bad thing". Etc.. John Lennon's "Imagine" is on that theme.

I agree that lots of wars have been in the name of religion. It'd be daft to disagree. But generally they're tribal and racial and cultural and political and are just called religious. If you're born in "Norn Iron", for example, you are born into a tribe. The protestant tribe. Or the catholic tribe. And there are plenty of people on each side who don't actually have any kind of living faith or relationship with God, who never pray or read their Bible, who are nonetheless bitter in their hatred of the other "team". Neither lot, in any real sense, are "Christians".

Certainly lots of horrible stuff has been done in the name of Christianity, and those who dismiss religion on that basis have some foundation for what they say. But I often think that the other side is never put. The truth is that Christianity, in spite of the fact that all those following the Christian faith are ordinary flawed human beings who stuff up on a frequent basis, is a huge force for good.

In Scotland, for instance, Crossreach, the social welfare arm of the Church of Scotland, is the biggest voluntary social care body in the country working with: Addictions, Children & Families, Counselling & Support, Criminal Justice, Homelessness, Learning Disabilities, Mental Health and Older People. Lots of people volunteer with Crossreach, and whilst others are paid, all the money comes from the sacrificial giving of Christians. And that's just the Church of Scotland. The Roman Catholic church and other protestant denominations are doing the same sorts of things.

And in individual congregations all over Scotland, lots more voluntary stuff and good works are going on: Parent and Toddler Groups, Pensioners' Lunch Clubs, Youth Work, Kids' Clubs and all sorts. Churches are providing volunteers to do good things in the community, in schools, hospitals and prisons.

Atheists are doing good works too. Of course they are. (In my experience not on anything like the same scale though...) But my point here is simply to reflect that when you who are Christians hear, yet again, about how religions are responsible for all the wars, and so on, perhaps you should be less shy about telling the other side of the story. Not to boast, because "it is God who works in you to will and to act according to his good purpose" but just to set them straight.
Posted by AnneDroid at 22:19

Religion, like everything else associated with human beings and life in general, is dual in nature.

As such, religions can be a force for what is viewed as either good or evil. It is what we as humans choose to do with the particular religion we ascribe to is what the crux of the argument is.

Now, faith is an entire other issue. both those who use religion for good or for bad have faith. It is how this faith is interpreted that seems to direct which was a religion will be used.

Its good to see such a sensible analysis of tribal religion.