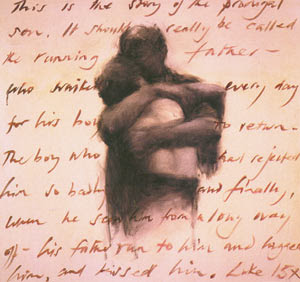 In the Bible, in Luke 15, we read the following (I've chosen "The Message" translation):

"By this time a lot of men and women of doubtful reputation were hanging around Jesus, listening intently. The Pharisees and religion scholars were not pleased, not at all pleased. They growled, "He takes in sinners and eats meals with them, treating them like old friends." Their grumbling triggered this story.

"Suppose one of you had a hundred sheep and lost one. Wouldn't you leave the ninety-nine in the wilderness and go after the lost one until you found it? When found, you can be sure you would put it across your shoulders, rejoicing, and when you got home call in your friends and neighbors, saying, 'Celebrate with me! I've found my lost sheep!' Count on it—there's more joy in heaven over one sinner's rescued life than over ninety-nine good people in no need of rescue.

"Or imagine a woman who has ten coins and loses one. Won't she light a lamp and scour the house, looking in every nook and cranny until she finds it? And when she finds it you can be sure she'll call her friends and neighbors: 'Celebrate with me! I found my lost coin!' Count on it—that's the kind of party God's angels throw every time one lost soul turns to God."

In honour of that great passage, and in honour of G, for whom this was a special day, I post this video. Sometimes I don't "get" classical music, being an ageing rocker really, but I "get" this and was playing the Prom Praise recording of it at full bung in the car today.

I quite like the image of God as a party thrower.

I wonder how many parties
God's Angels through each day? I would like to think the numbers are numerous!

In honour of that great passage, and in honour of G, for whom this was a special day, I post this video. Sometimes I don't "get" classical music, being an ageing rocker really, but I "get" this site and was playing the Prom Praise recording of it at full bung in the car today.