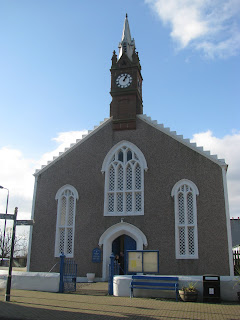 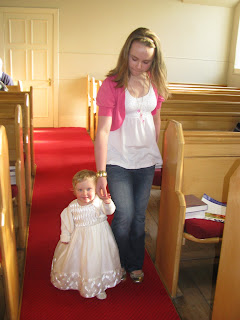 Today was a special day for friends of ours. The daddy of the wee one in the picture is the new minister of the church in the other picture, and this was the first Sunday since his ordination and induction into the charge. Their extremely adorable daughter was baptised during the service.

Firstborn and I travelled to celebrate the occasion with them, staying overnight with other friends last night who this time last year were also new to a congregation and are now old hands at the game. It was great to see them again too as we miss them now they're further away.

I am so thankful that we were able to be at the service today. Pay attention as you'll get confused now, and, for all you know, I may be setting an exam at the end. The wee one's grandpa used to be Him Indoors's and my minister. He was kind of responsible for us getting together as he asked us to run a youth group in his church and you could say that one thing kind of led to another. But off and on for a few years before that, I had babysat his two daughters, since before they were at school. The older of the two is now the mother of the wee one in the picture and the wife of the new minister of this church (whose dad is also a minister).

It was great to grab a photo of our photo-shy Firstborn and the wee one. Both have a middle name in common - Joy. Hence the post title. During Firstborn's first year in this world, the mother of the wee one was studying nursery nursing at college and as part of that followed Firstborn's progress during her first year and then after it was assessed, presented us with the project to keep. She also babysat a bit. It's just a pity they're not nearby enough for us to reciprocate again with the babysitting. On the other hand they're in a very pretty location - we may just have to invite ourselves down for another visit some time.
Posted by AnneDroid at 22:38

It was so lovely that you made it - you're welcome to visit/stay anytime! Lovely blog!

Wow, well done. It was lovely to see both Hannah and yourself yesterday. Thanks for making the effort. Hannah is quite a young lady now. Much love to you all.

That is a very beautiful picture of the girls. I'm glad you had the chance to be there.

It was just so special - I wouldn't have missed it for anything!