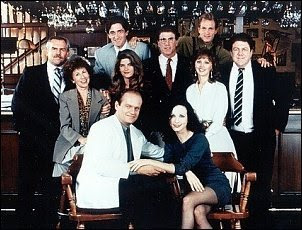 Do you remember the theme song of "Cheers"?Probably the best remembered line from that song is "You wanna go where everybody knows your name".

It's nice to belong somewhere. When I was a kid my dad was the local minister. On a Saturday morning I would be sent up the main street with a shopping trolley (why was I not embarrassed?) for what we in the west of Scotland call the "messages" (not messages, actually, but groceries). The last shop I went to was the bakers, where there would be ready waiting for me a brown cardboard box tied with string containing forty small rolls (they were called TV rolls for some reason) and I would sit it on top of my trolley. There were four of us in our house and we all got two each for our packed lunch Monday to Friday (4x2x5=40). Anyway, up and down the street as I did the shopping for my mum, I would be greeted by several people who knew me as the minister's daughter. I didn't realise how nice that was at the time. When, as a teenager, we moved to a different town I found I didn't much care for being unrecognised, overlooked and generally ignored when I went shopping! Poor me with my whatever-you-call-it complex.

Nowadays we are a much more mobile society. We don't work where we grew up, we don't spend all our lives in the same place any more. We travel to socialise. Many of us don't have that community thing so much now. Actually as a parish minister's wife I've now got it again, but lots of folk don't.

However, for those who have had the experience of living in a community "where everybody knows your name" as the song said, it can be difficult when you lose that. They say that's one of the reasons lottery winners aren't always as happy in their new life as they anticipated - they've moved away from their old neighbourhood.

Anyway, recently I've been thinking about this whole thing in relation not to myself but to prisoners. 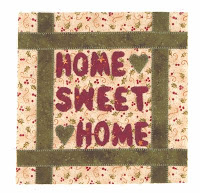 A big issue for many ex-offenders who are genuinely keen to mend their ways and live honestly and legally and stay out of jail, is what to do about their old haunting ground and old associates. Prison has removed them from the situation but as they look forward to liberation they have to think about the implications of going back home.

Imagine many of your family are drinkers/drug users. Imagine many of your friends are drinkers/drug users. Imagine many of them are in regular trouble with the police. Imagine you have been in trouble yourself since you were a young teenager but now you are 25, 35, 45, whatever, and are really determined to go straight and behave yourself. You never want to go back to jail. You are due for release soon. Should you go home? You've missed your family and they're excited that you're coming home. Where else could you go anyway? But how to manage living back there whilst staying sober/clean and out of trouble...?

And then, deep down, there's this community thing tugging at you. In the Bad Old Days, you were known in your area. Everybody certainly knew your name, and your pals' names. "Respect", well fear anyway. No one would mess with you because of your reputation, so you felt safe. Going to a new area you wouldn't have that. No one would know your name. You'd be a nobody. And you wouldn't be used to the vulnerable feeling that would arise in you.

These are real issues. I've been having conversations with prisoners on that very topic recently. The authorities sometimes don't want a guy going back to an area because of the "old associates" temptation problem, and yet sometimes they don't want a guy going to a new area because of "lack of support". "I can't win", a prisoner told me. But most of the guys themselves struggle to know the right thing to do or else, more often, know that they have no choice because there are no options for a roof over their head anywhere else.

If you've read this far, and you're not asleep yet, there is a fascinating verbatim account of a discussion among prisoners in an English jail recorded here. The bit I'm referring to starts about two thirds of the way down the page, focusses on a guy called Rick, and you need to do the "click here" thing at the foot of the page to get the rest of it. It's all to do with whether he should go back to his old "manor" or not. It was maybe a stage-managed performance for the benefit of the journalist but I've certainly heard this kind of thing said.
Posted by AnneDroid at 19:48

Change is so hard. That vulnerable feeling, I know it so well, even though my life changes haven't been anything like that.

I hope this doesn't sound like a frivolous comparison, but here in the states, there has been a lot of discussion of this same issue but not with criminals. With athletes. A lot of these guys spend the first 20 or so years of their lives dedicated to sports to get themselves and their families out of poverty. But then when they sign the multi-million dollar contracts, the old gang from the 'hood want to still hang out and do the old things. And the athletes get in trouble and everyone is outraged because you know, hey man, we're paying you all this money, dump those guys. But they're his friends.

It shows the importance of community but in a negative way.

I love your blog, it comes from a place I've never been and today it gives so much food for thought. I come from "that" kind of community where everyone knows everybody AND their business. It would be a hard place to come home to if things weren't just so!

I would like to see them given the sort of support that they need to break the old habits and let them move on with their lives; if that's what they want to do... change cannot be forced upon them, they have to want to do it for themselves, but it is easy to get drawn back into old (and sometimes bad habits) because of other influences...

If they are genuinely keen on prisoners not re-offending then perhaps the system needs to be amended to assist them.

Great blog by the way.. love reading it; my SOH was a PO but has since changed jobs as he was disillusioned with the job but he enjoyed helping the guys.

Sadly, I couldn't get the second part of the link to Grendon to work, but I get the drift. Yep, it's a problem for sure. I'm not part of that kind of society, but it's easy to see how that works. It surely wouldn't do any good to force these guys to move somewhere else and yet how hard it must be for them to change within their 'manor'!

There doesn't seem to be much imagination in the follow up processes if this problem isn't recognised. You would have thought it wasn't beyond the wit of the authorities to encourage vulnerable ex-offenders to have a totally fresh start even if that means a geographic move.

Thanks Linda and Sage.

No easy answers, as these comments all show.

I enjoyed reading your story. Please join our minister's kid community at www.ministerskid.com!
Thanks,