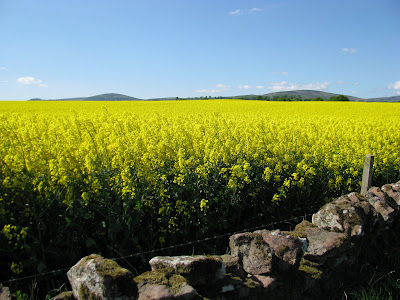 I took these two photos today en route between prisons. The oilseed rape fields are at their best at the moment. It's not a universally popular crop. Some people argue it causes allergies and many people also feel that the bright blocks of colour spoil the landscape. I have plenty of sympathy with the former objection if it's true but I'm not so offended by these fields' bright appearance as the second group of objectors. But then since daffodils are my favourite flowers, perhaps I just like big yellow flowers (except triffids, if they were yellow - I can't recall).

The first time I ever saw a rapeseed field must have been twenty something years ago, from the window of a bus taking a Sunday School class from Lanarkshire to St Andrews' Craigtoun Park. I had at that time a delightful class of seven year old boys. Amidst all the cries from children all over the bus of, "Haw, miss, err's a yella field", I heard from a little boy called Alan, in my class, a whispered, "Oooohhhh... there's a magic garden!" I have never once passed a field of oilseed rape since without thinking, "Oooohhhh, a magic garden!" I hope I haven't just similarly afflicted you by telling you that story. 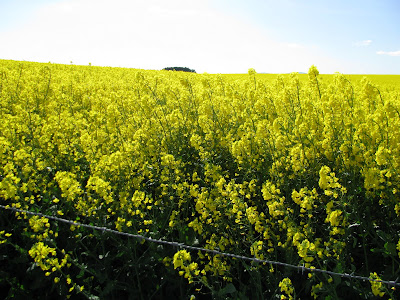 Triffid flowers were orange. I know this because (check my profile) Day of the Triffids is one of my most favourite books ever. I was obsessed by triffids in first year at school as we did a project on them. I can still remember my 3 foot drawing of the three-legged-stick like legs (with the rattly bits with which they communicated before they came to get you, of course)

I remember my first sight of a rapeseed field too, when my family was driving across Canada when I was about 11. I thought it was beautiful.

Your first memory of a rapeseed field is the same as mine!