Tell it to the judge (afterwards) 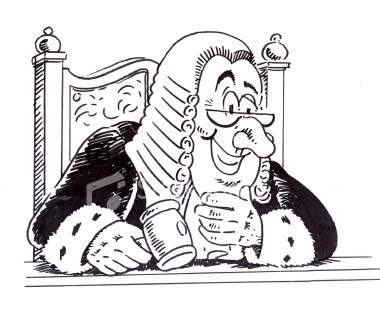 We had a judge for lunch yesterday. Not literally. Probably literally having a judge for lunch would still warrant the death penalty under some little known law. We had a judge in our house yesterday to whom we gave lunch. This is not something that has happened before and I had been wondering earlier in the week what to feed him. At the end of last week our prisoners produced a jail magazine and it had a recipe page in it. Ah ha!

So, we fed the judge, who is very nice and was not wearing his regalia or his wig (to the kids' disappointment) a meal cooked from the jail magazine recipe! Seemed beautifully appropriate and/or ironic. We didn't tell him till afterwards where the recipe had come from but he took it well. He is doubtless responsible for a number of our jail's inmates being in prison (well, no he's not - he didn't commit the crimes, but you know what I mean). The recipe was for chicken marinaded in a concoction including 7 Up (believe it or not) and was actually delicious. It was submitted to the magazine by one of our Education Unit staff. I shudder to think what recipe the prisoners might have come up with had they known it was for a judge.
Posted by AnneDroid at 22:40

Email ThisBlogThis!Share to TwitterShare to FacebookShare to Pinterest
Labels: Humour

great story! and can we have the recipe?

We did Ham joint in Coke with friends a few days after Christmas... recipe, please...

Great story. The last line really made me smile.

And thanks for visiting my blog. I hope you'll stop by again sometime.

The guys at my place could spend a whole evening with the recipes they've dreamed up with items from the prison store. Top Ramen is the main ingredient of many things. We could do a cookbook and make money, I'm sure of it.

maggi and alan, here you go:

(We served it with boiled baby potatoes and boiled veg and we boiled up the marinade in a pot as a sauce).

(I'm sorry - I've been resisting this for a while, but eventually my will-power was insufficient.)

Hahahahahahaha. That would have been funnier, indeed.

I like the picture of the judge, and I would like to use it for a Christian tract called 'Law and Order'. Is it permissible? You can read the tract here:
http://burden4souls.wordpress.com/2010/07/10/burden4souls-law-and-order-tract/