Bring Back the Clown and the Jelly and Ice Cream. 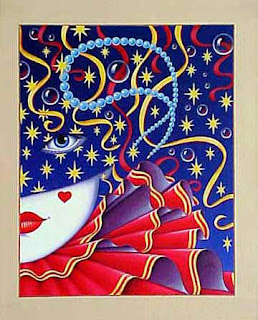 Last night I took Firstborn, who is nearly 13, to her first Teen-style party in a local nightclub. This was a traumatic experience - for me. She's into hockey - think Sporty Spice with the tracksuits - and I had to talk her into glamming up a WEE bit. However, when I dropped her off I felt (to be quite honest) a leaden feeling in my stomach at the sight of some of these 12/13 year old girls with the make up trowelled on and outfits that a prostitute would draw the line at. (Not all of them, but some of them). I understand that they are innocent and don't realise why it makes some of us adults feel uncomfortable.

And I know she's past the soft play area stage and the princess party dresses. I'm not naive. But I'm scared for them all.

Kids are sexualised so young nowadays - look at their tv choices, their clothes choices in the shops, the celebrity culture obsession with image and the associated eating disorder problems. I just want to stand up and say it's wrong. I need to stand up anyway - I'm off to the cinema to see Horton Hears a Who with the younger contingent of the Droid family. One of the characters in it has 96 daughters and 1 son, so his worries are definitely greater than mine!
Posted by AnneDroid at 12:41

Email ThisBlogThis!Share to TwitterShare to FacebookShare to Pinterest
Labels: Me, social issues

We were just discussing this with friends last night at dinner. They have two daughters, 14 and 11 (I think), and they have the same concerns. Such hard decisions for parents these days. I wish wisdom and strength for all families.

I'm glad I have two boys!

By the way, you have been tagged.