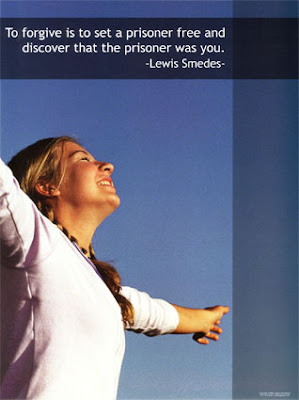 I wrote this for work purposes but thought it might be worth sharing here. The main resources I used are credited in the last paragraph.

Bitter people often:
- have an amazing memory for the tiniest detail
- wallow in self-pity and resentment
- catalogue every offence and are always ready to talk about how much they've been hurt
- seem calm on the outside but inside are about to burst with pent-up feelings
- defend their grudges constantly
- feel they've been hurt so deeply or so often they are exempt from the need to forgive
sometimes have hearts so full of bitterness they're no longer able to love at all

Bitterness is more than just a negative outlook on life. It's a very destructive and self-destructive power. It's just like a dangerous, poisonous mould or spore because it thrives in the dark recesses of the heart and feeds on every new thought of spite or hatred that comes our way. Or it's like an ulcer which is aggravated by worry or like a heart condition that's made worse by stress. It can affect you physically and certainly it affects you emotionally. It also affects those around you.

On the other hand, forgiveness is a door to peace and happiness. It is a small, narrow, hard-to-find door, and can't be entered without stooping humbly. But no matter how long the search, it can be found and it has the potential to lead to the most amazing freedom.

Forgiving has absolutely nothing to do with human fairness which demands an eye for an eye and a tooth for a tooth, and it doesn't mean excusing and brushing things aside. When we forgive someone we still recognise the hurt for what it is, but instead of lashing out or biting back, we try to see beyond it and to view the person with good will rather than ill will, whether they deserve it or not, because forgiving them makes us better.

Forgiveness maybe won't take away all our pain, but the letting go will help. It might not even be acknowledged or accepted - but forgiving will stop us being sucked into the downward spiral of resentment and it can guard us against the temptation of taking out our anger or hurt on someone else.

Forgiving doesn't mean forgetting or condoning a wrong. It doesn't depend on a face-to-face meeting with the person responsible for it, which might not even be advisable. But it does mean making a conscious decision to stop hating, because hating can never help. Sometimes, even when we recognise the need to forgive, we're tempted to claim that we can't. It's too hard, too difficult - something for saints, maybe, but not for me. But it IS possible, and it IS worth it.

For further reading, you could try Jesus' thoughts on the subject - look in the Bible for Matthew, Mark, Luke or John, or if you are anti-Bible for some reason, I also recommend "Why Forgive?" by Johann Christoph Arnold, which has powerful and painfully moving and heroic stories of forgiveness in the most extreme circumstances.
Posted by AnneDroid at 18:51

Email ThisBlogThis!Share to TwitterShare to FacebookShare to Pinterest
Labels: bereavement, bitterness, the Bible

I was very taken by the paragraph on bitterness. A few home truths there I think.

Thanks for this, it meant a lot to me today. Liz G

thank you! I enjoy your blog. I have blogged a link to this excellent post