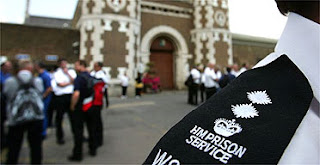 A prison officer at work told me that one day when she was supervising the visiting, a wee 2-year old who was in visiting his dad came up to her, pointed at her white shirt with black epaulettes and said, "Polis" (Scottish for police). She said, "No, my name's ....., what's your name?" The wee fellow couldn't yet say his own name, but already he could say, "Polis". She thought, "there goes one of our future customers". Hopefully he won't be, but I know what she means. Sometimes you feel some kids haven't a chance, don't you?

A prisoner I've got to know well, who claims to be a Christian, will be "libbed" (liberated, released) this year, and although I've spent a lot of time with him, I've yet to be persuaded that he has the faintest idea how to live honestly and within the law. The more I learn of his background and the number of his relatives in jail, and so on, the more I think that he actually doesn't know how to live honestly. And yet, he's never been in jail before, he's hated it and he's determined never to be back. He wants to provide for his family. He plans to work. He plans to go to church. But I think he's like a grown up version of that wee 2-year old and won't succeed unless he can somehow unlearn all he learned as he grew up. I am really really really thankful for my upbringing, in which I learned right from wrong, and I worry for this guy's wee ones, that he'll be equipped to teach them right from wrong.

Meanwhile back at the ranch, Him Indoors celebrated a significant birthday this weekend (he's catching up with me) and, not wanting a party, chose instead to have those who wanted to join us for a five mile walk at the Hermitage, Dunkeld, on Saturday. It wasn't warm, but was fine if you kept moving, and it was sunny, and we had a lovely time. The photo of the "empty tomb" I posted for Easter Day yesterday is in fact the hermit's cave that you pass on the walk. Apparently there was never a real hermit in it. The Duke of Atholl allegedly paid a servant to pretend to be a hermit whenever he was taking his guests out for a walk. Shocking, eh? If you look closely at the photo you can see our kids' Auntie P. Here's the crew who assembled to help us mark the occasion. 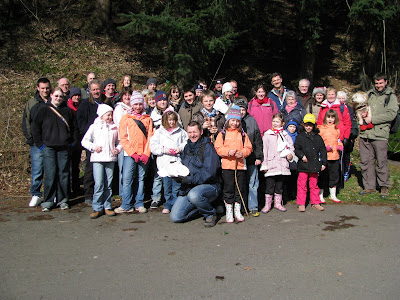 And, finally, yesterday I was allowed to take 3 prisoners from the jail to our church for the Easter Day service where, at the coffee time afterwards, one of our members who is in his day job a Chief Inspector in the police (but at church is a Sunday School teacher and family man) gave them a creme egg each (left over from the ones that were given out to the kids). That's one of the things I like about church - it brings together wonderfully random combinations of people. I love the fact that even in just our church I have friends of all ages and from all types of background, in all levels of maturity in the Christian faith, and with problems and hang-ups and obstacles, just as I have, though not necessarily the same ones. Church is a great leveller. The guys enjoyed the service and indeed it was a great service yesterday and the church was bursting at the seams. The songs were good ones anyway but the big crowd made them sound even better.
Posted by AnneDroid at 20:44

A few characters in the photo I haven't seen in quite a while...Excellent!

Happy 'significant' Birthday to him!