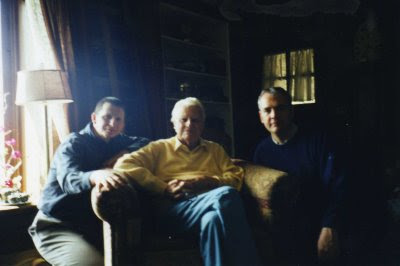 The above is a treasured picture for us, especially for Him Indoors (left). A number of years ago, he had the opportunity, while in the U.S., in North Carolina, at a conference, to visit the famous evangelist Billy Graham (centre, obviously) at his own home, along with our friend Richard, on the right, who has now emigrated and is a pastor in Greenville, South Carolina.

I was thinking today about something I once heard Billy Graham say while on these shores of ours. We have heard him preach live in Scotland (Murrayfield, Pittodrie and Parkhead) but Him Indoors and I once upon a time, whilst still "courting" went all the way to Wembley in Englandshire too. It was something he said at Wembley that occurred to me today.

As everyone knows, the end of a Billy Graham meeting would be marked by an invitation to "get up out of your seat" and come forward and stand at the front, if you wanted to ask Jesus into your life and become a Christian, or if you wanted to rededicate yourself in your faith after a period of going astray, or indeed if you just wanted to know more. I've done the counselling on the pitch. I've led follow-up groups. I've seen people's lives permanently changed from the moment they "got up out of their seat" onwards. Although I'm by nature a total cynic, I can see God at work when it's as obvious as this. Sure, folk fall by the wayside. They don't all keep it up (isn't that what Jesus predicted in the parable of the sower?) but lots do.

Anyway, I'm not meaning to get involved in depending the credibility of Billy Graham as a servant of God. I just wanted to quote a funny wee thing he said all those years ago at Wembley, which has stuck in my mind.

Being of a cynical nature, every time I have heard him preach (and for that matter when I heard Franklin, his son, who came to Perth in 1999 - Him Indoors was heavily involved in the organisation of that visit) I have been of the opinion that "Huh! No one will come forward tonight. No one's going to get up out of their seat tonight. That message wasn't enough to overcome people's embarrassment and laziness and self consciousness and suspicion. I bet no one comes forward. Huh!" etc... I told you I was a cynic. Of course every time I've been amazed to see lots of people stream onto the pitch, sometimes including people I knew personally. Of course, I had never remembered to factor in the thought that most of these people had been brought by friends who'd loved them and prayed for them and shown them a godly example for many months.

Anyway, that night in Wembley, to the assembled throng who had got up out of their seats and come forward, Billy Graham said that he was sorry he would not be able to meet them all individually. However, there was the promise of all eternity yet to come, and that there would be plenty of time in that promised land for getting to know one another. Everyone laughed when he said, "Maybe I'll come to your house for a hundred years for a cup of tea".

I was thinking about that today because we are so busy these days. We don't get as much time to spend with friends as we would like. 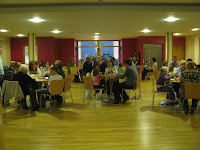 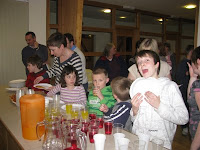 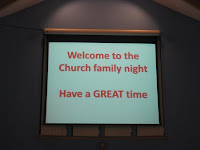 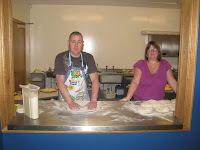 Last night we had a "family night" in the church, with the best part of a hundred people at it. A bouncy inflatable assault course (which I didn't go on but would have if I could have done so alone with no audience), a magician, a Wii, a quiz and lots of freshly baked pizza. Excellent fun! I ended up in the kitchen for a bit, and missed the magician. Perhaps this was a good thing. Magicians make me irrationally angry. It's pride. It's the fact I don't know how they do it. But it was a good thing for a better reason too - I so enjoyed my time chatting with two friends, the chef and the sous-chef for the evening, who I see so much less of now I'm working full time. Much as I love my job, I miss my pre-full-time-work-social-life.

And then today, we went to Edinburgh to visit friends. They used to live round the corner from us and we saw them a lot at the school gates, and sharing lifts to various children's activities. Their five, and our four, children are the fifth generation of our two families to be friends. My 101 year old gran and my friend's late grandmother grew up on neighbouring farms near Airdrie and walked to primary school together every day. (My first job was as a turkey plucker on one of those two farms but that's another story). Now, partly because our friends have moved, but mainly because we are all so busy we only see each other once a year. It was so nice to catch up, to see how each other's children have grown, and to find we "started where we left off" as friends, as if we'd never been apart.

I am hugely comforted by the thought that time for each other won't be at all restricted in eternity.

It's thrilling that we don't have to earn our way to heaven. Just as well since we've all "nae chance" of so doing. No other religion has the same astonishingly good deal, because we're offered something much better than trying to earn God's approval. Whilst still squelching about in our own mess, we're offered pardon for our sin, the debt of that sin cancelled by Jesus, and help to get out of our mess, if we'll just hand over the controls and stop trying to run our own lives.

Anyway, I want to say that you're all (especially those of you I've not yet met) invited to join me for an extremely unhurried cup of tea (or in my case black coffee/diet coke/red wine/cider as I wouldn't thank you for tea) for a hundred years and we can get to know each other.

One last thing, which is not at all unrelated. A friend of mine, W, is dying. He needs the hope that believing all this would bring him. If you're the praying kind, please please please pray for W. THANK YOU.
Posted by AnneDroid at 22:09

A hundred-year cuppa would be lovely.

Saying a prayer for W.

"I have been of the opinion that "Huh! No one will come forward tonight. No one's going to get up out of their seat tonight. That message wasn't enough to overcome people's embarrassment and laziness and self consciousness and suspicion. I bet no one comes forward. Huh!" etc... I told you I was a cynic."

Me too, Anne Me too. Great to be proved wrong though, eh?

Looking forward meeting you "on that day." But I have a feeling we'll be so enthralled with Jesus we may not care too much about anything else.

And, do you think there will be coffee in heaven? I like mine black and strong (my only vice left).

praying for W and you as you minister to him

Thanks, all of you.