It's Friday but Sunday's coming.

Look what was happening at our church today: 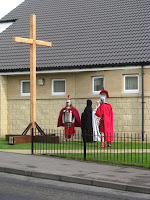 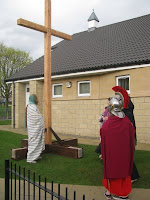 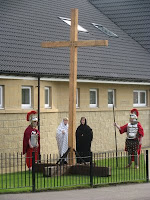 Actually it wasn't just at our church. There were six similar scenes set up round the town/city (its current status is a matter of dispute but that's another story) as a joint project by a few of the churches, between 9am and 3pm. The purpose was simply to cause people to remember Easter as being about something other than Easter Eggs, delicious though they are, and daffodils and rabbits, delicious though they may be also, though I've never tasted either.

Also, there was a "walk of witness" in the town centre: 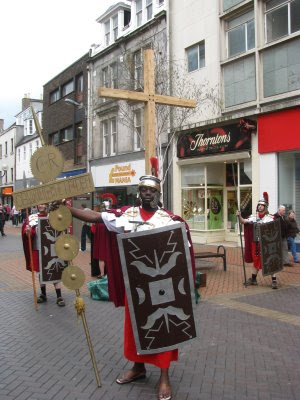 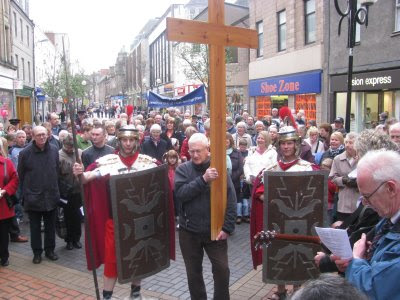 I missed the whole thing, being, as I was, in prison. However, I did get to watch the Jesus film with the second batch of prisoners this week. It may be the most watched film of all time since its appearance in the 1970s but it's probably not the best film of all time, to be honest. Yet, it's a faithful version of Luke's gospel and it really brought home to me how relevant the Christian message is to our guys. Jesus was so subversive. He wasn't impressed by puffed up human authority and loved the underdog so passionately.

Good Friday this year is kind of special to me. It's 30 years this year since Good Friday 1979. I was thirteen - strange, that, since, 30 years on, I'm only 21, but I'm a slow developer. I was at a camp in St Andrews run by Scripture Union. It was on Good Friday 1979 that I understood for myself that the cross was to do with Jesus taking the punishment for my sins, on my behalf, so I could be forgiven and adopted as God's child. In the process I would be promised eternal life in heaven when I die. For years I said that was the night I became a Christian, but, since I grew up in a Christian home, I think now it was rather the moment when I owned my inherited childhood faith for myself. (All who grow up in Christian homes need to do that because God has no grandchildren). Anyway, all these years later I remember it as a significant moment, and it was quite nice to spend the thirtieth anniversary watching the same message that I understood then be dramatised before these men. I hope it did some good for them too.

Incidentally, as I was telling guys round the jails that the film was being shown this week, the common witty retort (from staff too) was that "I don't need to watch it. I know what happens. He dies in the end". How funny. NOT. I was amazed how many times I had to say, "No! He comes back to life after that!" to which I got, "Oh yes. I forgot". That's why I picked the title I did for this blog post. Today is a sad day for Christians, but it's not the end of the story.
Posted by AnneDroid at 21:23

My husband is planning to eat a daffodil as part of his children's talk this morning. I will ask him what it tastes like!