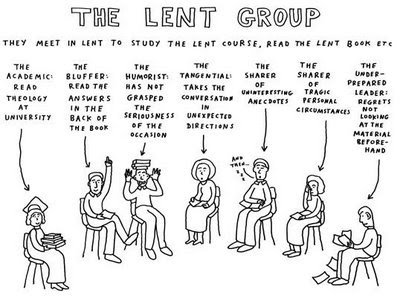 This is another of Dave Walker's brilliant cartoons. Those of us who've participated in any kind of Bible study group/home group/similar or even secular groups will relate, I'm sure.

Leading a small Bible Study group in prison is this, but taken to a whole new level. And I love it.

But I just love the randomness of it and the fact they'll interrupt and have a sudden round of making tea in the middle of trying to get a point across. Or argue so fiercely with each other that I wonder if a fight will break out and I might need to press the staff alarm. Or go off on a tangent to have a discussion about aliens, or the parole system, or something on tv. (I do try to control it, but you've to pick your battles and let some red herrings swim for a bit, to mix my metaphors). The air can be blue with some of the language but you get used to that. It's crazy and impossible and hilarious and weird. But it can also be so incredibly profound. There can be moments of utter honesty, or of a light going on in a head (and often it's my head), or of that sweet love/joy/fellowship thing which suddenly, though maybe fleetingly, engulfs a ragbag group of Christian folk with otherwise apparently very little in common.

Occasionally guys have said of these meetings that for that time in the week, it's as if they're not in prison. How wonderful. It's not just, I realise, that I want guys to Get Out of Jail Free. I want them to experience freedom while they're still incarcerated. "If the Son shall set you free, you shall be free indeed".
Posted by AnneDroid at 23:10

Beautiful post Anne - think I've been everyone (at some time or another) in that cartoon!

I agree and I loved the cartoon: so true!