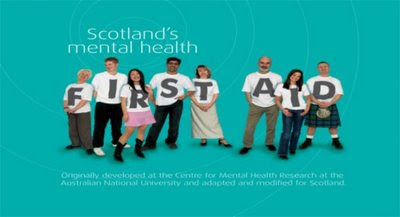 Recently I attended a Mental Health First Aid course. It was really excellent and although I knew a lot of the stuff already, I didn't necessarily know that I knew it (if you see what I mean) and the course helped me put my knowledge into a clearer framework. The Scottish government are keen to get as many Scots as possible to do the MHFA course, which is 12 hours over two days, in order to help improve the mental health of the people of Scotland, by raising awareness and by helping us to be equipped to help one another. Our country's statistics are none too impressive as far as our mental well-being is concerned. It occurred to me that a church pastoral team, or the leadership of a few churches in an area, could get the course delivered to them, as in-house courses are offered.

Anyway, that's the plug for the course. But for me the most touching bit of what we heard was on a video clip from a lady called Abigail who has had serious mental health problems for many years but who said this, or something like this anyway: "Some people have the idea that the brain needs to be perfect because that's where I live. And if that gets disturbed, then, you know, I've been obliterated, or I've been damaged. You know, me, me, the essence of me. And that's not true".

I once heard that whereas animal charities are very well supported, mental health charities are the worst. I'm sure it's not lack of compassion. I'm sure it's fear. People don't like to think about mental health, because we're all aware instinctively of the truth that mental health/ill health isn't an either/or but a continuum and that we're none of us immune from mental illness. Thus we choose not to think about it, and isolate still further in the process those who've not been so lucky, and who're already isolated by their condition. Abigail came across as a lovely person and I thought that what she said, and what I've quoted here, was one of the sweetest, most positive and most profound things I've heard about mental health ever.
Posted by AnneDroid at 20:33

I think it a great shame on society as a whole,to turn from something that is not be feared or even jeared at.Rather support and assist the person through this time, for some it's an ongoing lifetime illness for other's a temporary "gliche" .There is so much stigma attatched to mental health but it's an illness the same as any other,and that person needs as much love and support , not ridicule and rejection.
AnneDroid "It occurred to me that a church pastoral team, or the leadership of a few churches in an area, could get the course delivered to them," go for it ...Church's Schools, Prison's etc are all in dire need of knowing and better still understanding it.

You Get my Vote