Him Indoors got a flying lesson for his 40th birthday six months ago (yes, he is my toy boy) and finally got round to taking it this morning. I went along to watch from the ground. Btw, he gave me a voucher for a helicopter lesson for mine (one of the most terrifying yet exhilarating experiences of my life). Clearly we were both just trying to get our hands on the life insurance but thankfully we survived.

Here's some pictures of his lesson. I had the camera till he got in the plane then he took it. 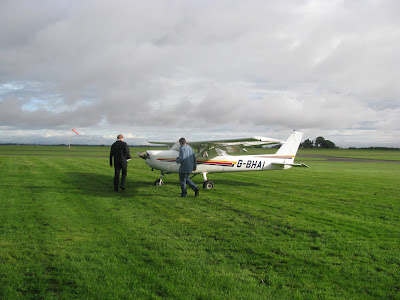 Well, he looks the part anyway... 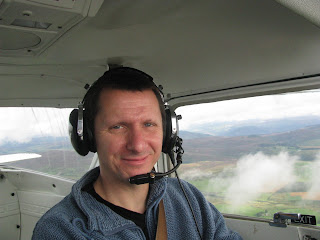 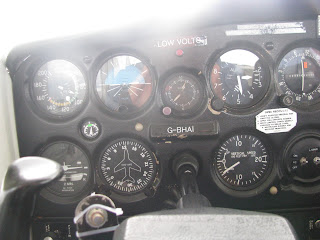 ...but I bet he doesn't know what all this means. 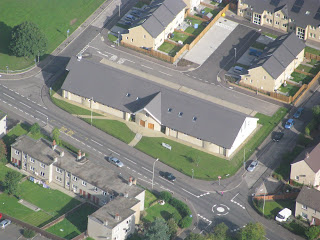 The right hand picture is the church of which he is the minister. Talk about taking a pastoral overview! 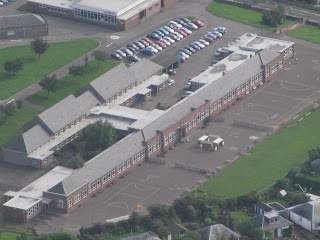 We hope Blue Eyed Boy, Penultimate and Youngest childen were looking out of their classroom windows. Would their teachers have believed them, though, if they said that was their dad up there in that plane, given that he's one of the football coaches at the school and the teachers know full well he's not a pilot?
Posted by AnneDroid at 10:55

awesome!!! wish I'd known he was overhead, I'd have tried to get a picture. kudos to the flying photographer, great shot of the school!

Hmm...Maybe Mrs. Nighttime is plotting something similar for my 50th next year. Here's hoping.

You're both braver than I am.

The photos are great.

Personally, I'm scared stiff of flying. Mind you, I've always had a thought that I'd probably actually enjoy flying a plane myself. If you know what I mean!!

Aghh my brother flies helicopters and I'm the only member of my family who hasn't had a scenic tour. Then I'm the last on the plane and a chronic knob twiddler . .he looks happy enough! I'm also afraid of flying but love travelling so it's a necessary evil if you're to see the world. Gah!

I chortled at the statement that you were obviously out for the life insurances...lol .. glad you and he enjoyed the experiences. Never know till you try whether they are good or not.

He looks a nice chap.

D-p, he's not a bad old thing. I won't be advertising him on ebay just yet.