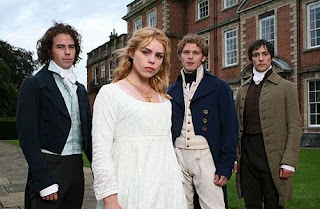 Him Indoors is away this week with Blue Eyed Boy, as a parent helper on the Primary Seven week away at an outdoor centre. So on Monday night I produced my newly purchased "Mansfield Park" DVD and Firstborn, Penultimate and Youngest Children and I watched it together, with me explaining it all as we went along. Currently, they are just finishing watching it for the third time (at their own instigation - I didn't MAKE them do it, honest). 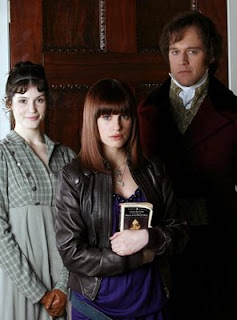 And now they're off to bed and Firstborn is going to be allowed to stay up to watch the concluding part of Lost in Austen which we've been enjoying. Well, I've been enjoying both the series and Firstborn's squeals of frustration as it's all going wrong. "Oh, no, no, NO! Grrrr!" (For those not in the know, a modern day Jane Austen fan gets hurtled back in time into the Bennett household of Pride and Prejudice, and, because she has traded places with Lizzie, things are departing increasingly far from the script. It's had some very funny bits in it too).

I'm AnneDroid and I'm a Prideandprejudicaholic. Looks like the female offspring are following in my footsteps. Oops. 9pm. Gotta go.
Posted by AnneDroid at 20:34

Eh - were you not aware that there was a Ranger game on tonight like??

I must confess that, Austen fan that I am, I have neither read nor watch either Mansfield Park or Northanger Abbey.

Oh you're so lucky, Ruth. I wish I still had some unread Austens to read!

Graham, get real. Him Indoors phoned shortly ago and asked the score. I had no idea of course - why he thought I might know is a mystery to me.

wow, your house must be feeling REALLY empty!! Do you have insider info from Him Indoors?

Elizabeth, yes I was getting phone calls from daddy at night which was reassuring. It seems to have been not the done thing for the kids to phone home - I suppose we were meant to feel no news was good news. Hope your cherub had fun. I was pestering (I now realise) a very tired Blue Eyed Boy on Friday at teatime with lots of questions. He looked at me, and with a very patient, indulgent, almost pitying air, said, "Mum, would it be all right if I told you about it tomorrow? I'm a little bit tired right now". Fairy Nuff, son. Fairy Nuff.