"My son makes aliens", and other stories 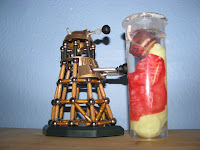 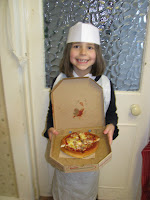 Youngest Child was dead proud this week because she got to go with her fellow Primary-3ers to Pizza Hut and make her very own pizza. All pleas from her siblings for a bit went entirely unheeded and the child who supposedly doesn't like pizza had it for tea, with a big side-helping of pride. 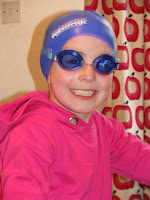 Penultimate Child is also a proud wee bunny having got through this morning's trials (8am on a Saturday - woe is me!) for the Swimming Club.

Firstborn? Well, no photos to prove it, thankfully, but (whispers) she's not in a great mood. She had two pals for a sleepover last night (that should read "wakeover") and between armfuls of sweets and some late night video watching, followed by having to be at the school at 8am today to get to an away hockey match, we are now all suffering. To be fair I admit I'm jolly grumpy when I'm tired too. (I appreciate you'll struggle to accept this is so.)

We went to visit my mother-in-law today, whose cancer which was in remission, has taken a poorly turn. It's sad. Please pray for her, and my father-in-law too. He's very anxious. Despite their best efforts to appear the opposite, they really are devoted to each other.

Workwise, it's been a good week, with some meaningful conversations, interesting meetings, and a good service on Friday. The previous Friday was the leaving night out for the outgoing Governor, which was a great laugh. Jail humour is something else! On Sunday I was conducting the service in a Perth church and, as I always do in these circumstances, I seized the chance to try and recruit more Christians to pray for prisoners. The obstacles these guys have to overcome to reinvent themselves as normal law-abiding citizens can be really huge, and although the media encourages us to condemn them, that's not God's way. EVEN, though, EVEN IF people have no sympathy for prisoners at all, they must surely see that efforts to help them integrate into society and "better themselves" will pay dividends in terms of our own safety, and the protection of potential future victims... But as Christians we're not called to have that motivation. We've to love because God first loved us. Sometimes I think the main distinguishing feature of the chaplain in a prison is that they exist outside the traditional "them and us" culture of staff and inmates. We're ALL sinners. It's a great leveller.
Posted by AnneDroid at 18:16