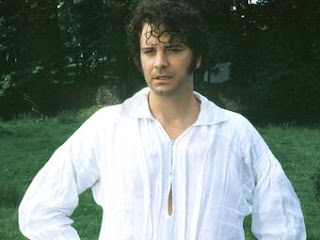 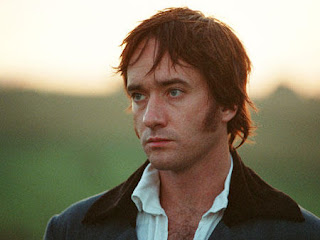 Which Mr Darcy is the best? I like 'em both, for the record. It's the character as written by Jane Austen that I really like, actually, though these two fine examples of God's creation do a good job in the roles.

I was discussing with a friend the other day our favourite classics (hers is Tess of the D'Urbervilles by Thomas Hardy) and I was saying that my daughters are all hooked on Pride and Prejudice too. Indeed they've now also discovered the brilliant Bollywood version, "Bride and Prejudice" and we've been enjoying it too recently.

What I'm now wondering though is whether I'm doing the right thing, as a mother. The thing I like most about P and P, and perhaps to some extent it reflects where I work, is that it's all so NICE. Even the baddies speak like gentlemen and there's no swearing, no violence, no gritty reality at all. But life's not like that. Should I be preparing these girls for the general absence of Mr Darcy's out there, or should I be encouraging them to set the bar high? I don't know.
Posted by AnneDroid at 17:33

Email ThisBlogThis!Share to TwitterShare to FacebookShare to Pinterest
Labels: Me

First things first - definitely Colin Firth. He did the repressed, brooding romantic to a T and anything else is only a pale imitation.

Secondly, speaking as a mum of a 22year-old and a 14 year-old, I find myself more like Mrs Bennett every day. I see it as my duty to instil high standards into my daughters with regard to relationships. So by all means give your girls high expectations. And actually, there are a lot of boys out there with high standards, too.

I have no sensible comments to make, but gratuitous pictures of
Mr Darcy (in any incarnation) are always welcome...

danny - thanks for dropping by and for clearly being of the same mind on this matter! :)

And "Mrs Bennett"(isn't she just a great character?? - thanks for the advice. It certainly makes sense :)