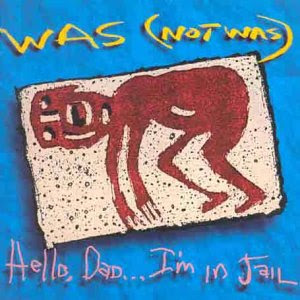 Hello Dad I'm In Jail by Was Not Was is just great. Watch it if you've never seen it. Weird, was not was it?!

I'm struck by the line, "I like it here". It was probably meant sarcastically but the truth is some of our guys do like jail better than life outside. If you've been in jail for years, being outside is seriously scary and even crossing the road or catching a bus is pretty daunting. Above all, in jail, everyone else is in the same boat as you and there's a sort of "fellowship" there. Yesterday I was talking to an officer about a certain prisoner and we were agreeing it's kind of a shame that when his sentence is over he couldn't just be given a job and allowed to stay! He gets on fine in jail but makes a pig's ear of life outside.

20 years ago I worked as a visiting officer for the Dept of Social Security at the time when under "Care in The Community" institutionalised adults with learning difficulties were being put out of their institutions into flats in the big (and in places wild) council housing estate. Good news for those on the look out for vulnerable people to relieve of their benefit. Some of them perhaps should never have been in an institution but, given that they had been, the transition was tough. Many had the mental age of children and just because they had been taught to shop and cook and clean didn't mean they were going to be happy living by themselves.

Before that I worked in a night shelter/ day centre for single homeless men. One fellow, D, had done really well and was drug free. Aged 34 he was allocated a flat and I was sent off to The Barras in Glasgow to help him spend his DSS grant of £500 (this was before loans came in) on everything he needed for his flat. I said, "Right you definitely need a cooker". "Oh no", says he, "I'll just light a fire". "D, you can't do that, you're on the twelfth floor of a multi-storey block. You must have a cooker". "Okay, but can I light the fire on top of the cooker?" He had lived in children's home followed by List D school (as it was then called) followed by Young Offenders Institution followed by jail followed by the Night Shelter. He was definitely institutionalised. And yet D actually did really well and got on fine, even with his cooker!

Lots of guys (and women) do get on fine, even if they've been institutionalised for a long time but an awful lot don't. I know prisons are overcrowded as it is, but sometimes I just think, you know, can't we just keep this guy and give him a job and a home? I'm not really being serious. Obviously we can't. But, expensive as it is to keep folk in jail, how much more costly in every way not just financial, to have them out wreaking havoc on themselves and others?
Posted by AnneDroid at 23:28