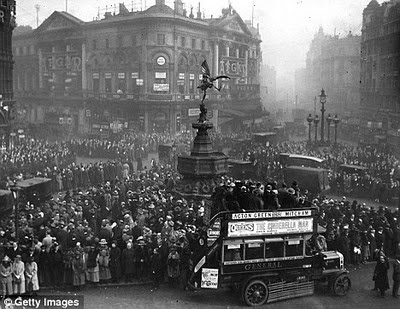 "The first stroke of eleven produced a magical effect.
The tram cars glided into stillness, motors ceased to cough and fume, and stopped dead, and the mighty-limbed dray horses hunched back upon their loads and stopped also, seeming to do it of their own volition.
Someone took off his hat, and with a nervous hesitancy the rest of the men bowed their heads also. Here and there an old soldier could be detected slipping unconsciously into the posture of 'attention'. An elderly woman, not far away, wiped her eyes, and the man beside her looked white and stern. Everyone stood very still ... The hush deepened. It had spread over the whole city and become so pronounced as to impress one with a sense of audibility. It was a silence which was almost pain ... And the spirit of memory brooded over it all." From the Manchester Guardian, 12th November 1919.

At a Remembrance Service today, it was my privilege to read that amazing newspaper excerpt along with two poems. The poems were Dulce et Decorum Est from WWI, by Wilfred Owen whose parents received the news of his death so near the end of the war just about the time that the Armistice was declared and This Place Called War by Joanna Carman about her brother going off to Afhganistan, which he survived only to be killed in Iraq at a later date. I also read a bit of Psalm 139 which I used so often at bedsides when I was a chaplain in the hospice movement but which seemed as appropriate here.

I always find Remembrance Services very moving and I'm so glad that 91 years after the first silence was observed, we are still doing it, and yet - as we all are - I'm obviously very grieved that the first world war did not after all turn out to be the "war to end all wars".

Today was only my second experience of taking part in a Service of Remembrance within a prison and both times I have found it to be moving in another way also. Prisonworld is, no doubt of necessity in some ways, a very them-and-us culture. Inevitably, the "screws" and the "cons" end up viewing each other (in practice rather than literally) almost as alien species, just as a result of the way the system operates. Even if you've never been in a prison, if you've watched the BBC series Porridge you'll know what I mean! Inevitably there are other camps too - senior management, the social work department, etc, working together but separate somehow. (I often think that chaplains are like Switzerland, "neutrals" in the midst - not because we're better people or anything, just that our job is different).

The Remembrance Service in prison is a very unusual and special occasion because we meet simply as human beings. There are ex-forces people among both the prisoners and staff, and both prisoners and staff may have relatives past and present who have fought or are fighting in war. All of us watch the news and all of us see, too often, the sad images of young people returning home from Afghanistan in a coffin.

There is something poignant and powerful about a prison Remembrance Service and I feel privileged to have been there today.
Posted by AnneDroid at 19:14

I found this fascinating, and with my work in literacy and numeracy I hope in future to be able to support people free themselves from imprisoning boundaries. xx

Very worthwhile piece of writing, thank you for the post.
free games