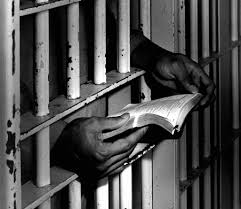 One of the first prisoners I got to know - let's call him Fred - was a committed (no pun intended) Christian who was very strong in his faith indeed.  He had become a Christian after his crime was committed but some years before coming into prison.  This meant that he had had the opportunity to become well established in a church.
When he went to prison, the people in his church were supportive of his wife and also of him.  He was visited, and prayed for, and written to.  Some days he would get ten pieces of mail - very unusual, to put it mildly - and the letters would be from people in his church.

I had read the book of Acts in the Bible many times in my life before becoming a prison chaplain, and meeting Fred, but I had never really noticed Acts 12:5 until then.

"So Peter was kept in prison, but the church was earnestly praying to God for him".

Peter, the gung-ho hothead of Jesus's disciples, that we love, who was devoted to Jesus and yet so human and flawed, prone to doubt and panic, once promised Jesus that he was ready to go to jail for Jesus or even to die for him.  In the end he got the chance to do both, but not before he had panicked and denied three times even knowing Jesus at all.  He was imprisoned for preaching about the risen Christ - but the church was earnestly praying to God for him.  And Peter came out of prison unscathed, earlier than expected and with his faith intact.  He had somewhere to go when he came out of prison, too, after Rhoda got over the shock, anyway.

In Prisoners' Week, the Church is encouraged to remember about, and pray for, all prisoners (as well as the victims of crime and staff).  In this post I just want to add, though, that if you're a Christian, it is important that you remember that in prisons all across the country will be Christian prisoners who are your brothers and sisters in Christ.  Many of them will be very new in their faith, with lots and lots to learn and very possibly much of the baggage and mess of their past still to face up to and deal with.  They are not like Fred with a church back home to pray for them and to go to when they get out.  They need your prayers!
Posted by AnneDroid at 00:47

Hi Anne, I volunteer for Daylight Christian Prison Trust. You may like to look at our website www.daylightcpt.org. Through my work I would agree that there are many Christians in prison who need the prayers of their brothers and sisters. There were 6 prisoners baptised on one Sunday in a particular prison recently. God is greatly using these humble, repentant people to reach others inside and inspire us on the outside. Prisoners write to us and their letters are always so uplifting as they tell us their testimonies, and the hardships they have overcome in their lives. Christian love and peace, Jules