We've been very blessed at our church over the last year by the presence of "Proby The Second", our lovely probationer Paul, who - sadly for us but not for his future congregation - is about to leave us for pastures new, with his lovely wife and family. Anyway I was so impressed with the story he told us on Sunday as part of our Service of Remembrance for those lost in warfare, that I asked if I could re-tell it here.

It was about Jacob de Shazer who I confess I'd never heard of. He was a bomber, who as part of America's retaliation against the Japanese for Pearl Harbour, set off to bomb the Japanese. He describes how he was full of bitterness in his heart and that, as far as he was concerned, the more Japanese he killed the better. However, he ran out of fuel and had to parachute - into the hands of the Japanese who held him as a prisoner of war, in very grim conditions indeed.

After two years' harsh imprisonment, he came into possession of a Bible and started to read it. He was so affected that he became a Christian. Romans 10:9 which says "If you declare with your mouth, “Jesus is Lord,” and believe in your heart that God raised him from the dead, you will be saved" impressed him particularly and he never looked back, knowing from then on that God was real and "we can't hide a thing from him" and then "the hatred went out of my heart". All his hatred for the Japanese vanished - an act of God without doubt.

After Japan surrendered and the war was over, he was flown back to America. He finished college then went back to Japan in 1948 as a missionary. Amazing!

Lots of Japanese people became Christians, partly through the ministry of Jacob de Shazer, whose return to Japan astonished them in the circumstances. 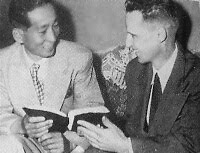 Undoubtedly the most remarkable and significant convert, Mitsuo Fuchida, who read a tract about Jacob de Shazer's experience and then went to the Bible and became a Christian (and a friend of De Shazer), had been the leader of the attack on Pearl Harbour.

That Fuchida and De Shazer should become friends after their past mutual hatred is amazing, isn't it?

By contrast it's a very little thing, and you may wonder at my mentioning it here, but for me this is a powerful illustration of something also very marvellous that I've seen recently. Last week it was my great privilege to be speaking at a meeting to raise awareness of Prisonworld amongst some church people. The previous night the previous occupant of the position of Her Majesty's Inspector of Prisons in Scotland, and a Prison Governor had been speaking. The day I spoke, I was preceded by a Prison Officer who gave a virtual tour (through powerpoint) of a Scottish maximum security jail. This officer happens to be a committed Christian. Between his talk and mine the audience heard the remarkable testimony of a former prisoner, whom I count it an honour to call a friend. Then I did a muddly kind of summing-up. What I appreciated more than anyone in the room, probably, was what a special thing it was for the prison officer and the (former) prisoner to be sharing the platform as brothers in Christ, as equals.

This link
will allow you the opportunity to hear Jacob de Shazer tell his own story, by the way. Not long, but well worth listening to.
Posted by AnneDroid at 22:35