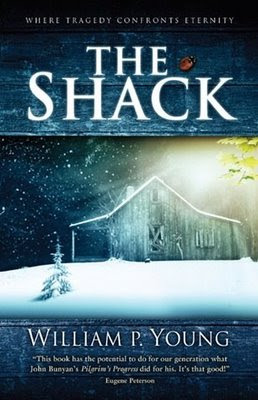 I've just finished reading this book: "The Shack", by William Paul Young and I really enjoyed it.

Not often does a Christian book hit the bookshelf in Tesco, but "The Shack" has done it, and I recommend it, especially if you've ever raged against God because of some suffering or other, or if you've been inclined to see God as a very scary headmaster ready with his belt handy for the next time you step out of line.

It's a novel about a man called Mack who has a terrible tragedy in his life that affects his view of God, and about how God (Father, Son and Holy Spirit) meets with him and they all become friends.

For those who like their God scary and inapproachable this won't go down well, and for those whose main priority is perfection in doctrine, it won't satisfy completely, but for those who are even mildly, vaguely, slightly, interested in the possiblity that God in fact loves us very much, this will be a real blessing.

Some of the ideas in it may be slightly wonky, in the opinion of some of us, but not enough to outweigh the power of the message that God isn't interested in making us miserable but in enjoying (yes, enjoying!!) a relationship with us.

Don't knock it till you've read it.
Posted by AnneDroid at 23:59

I read The Shack this summer and I really liked it. I even cried a couple of times. I know all the problems folks have with the theology, and if it was a theological treatise I'd have some problems with it. But it's a work of fiction, so it's not as big of a deal.

It's true then, every little helps!

Us and Tesco eh?

I will add it to my list of books, to read over christmas/New Year, I am sure I will find some time.

Yes, I am vaguely, even mildly interested in a God who loves me and I thought it was a fantastic book. I was thrilled when it was for sale in Tesco.

Don't see many John Stott books for sale beside the socks and pants section......