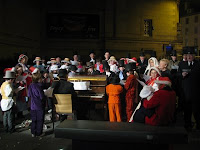 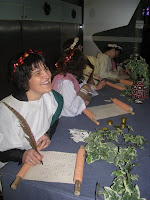 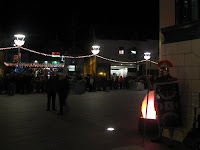 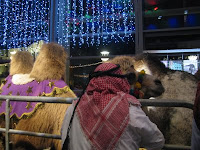 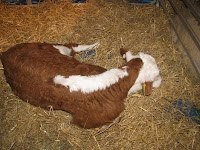 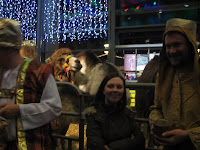 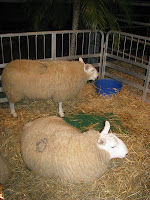 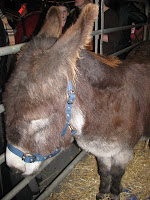 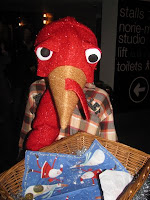 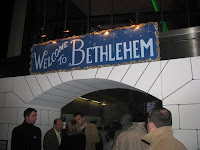 Tonight I was at the Bethlehem Experience. My father-in-law, brother-in-law, two sisters-in-law and three nieces also came along, along with the six of us and (between two showings) well over two thousand other people; the money brought in through ticket sales is going to the local churches' ecumenical homeless charity in this town.

It was really great. Him Indoors was the compere (I was dead proud) and also had to voice God in the drama. In front of me was sitting That Hideous Man (I sometimes forget my fellow bloggers are in fact real people and am surprised to see them in the flesh). 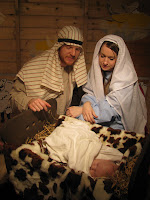 Before the show, Blue Eyed Boy and his pal were dressed as turkeys and giving out chocolate coins to all the kids in the queue. (Roasted chestnuts, popcorn and toasted marshmallows were also available). A Victorian choir were singing to the queue as well.

Once inside the foyer, there were three (real) camels, some wise men, a (real) cow, a (real) two-and-a-half-week old calf, two (real) sheep, a (real) sheepdog and a (real) donkey, as well as more Roman soldiers. A census was being taken at the door as we came in, too. There was also a stable scene where a real couple and their real baby (actually a girl!) were dressed as Joseph, Mary and Jesus. When I saw them the baby was sound asleep. 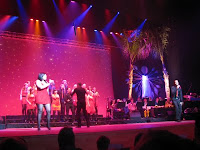 During the show, the superb ACM Gospel Choir, one of the contestant choirs in the television competition "Last Choir Standing", performed quite a few songs - the girls' somewhat minimalist dresses (who'd a thunk you could have got so many dresses from one piece of material?) not seeming to put them off their planned choreography one bit. My brother-in-law beside me was well impressed. I don't know if he noticed they were singing.

There was a drama about a failed X-factor auditionee realising she was still loved by God, a nativity tableau (with real live donkey and very cute children), and a great swing band to play throughout. 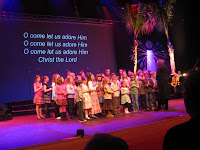 My own Penultimate and Youngest Children sang in the children's choir (look for stripy tights front row and pink tights second front row).

Our resident (and lovely) local Christian multi-millionaire, as well as pretty much funding it all, spoke really well too, with a message to celebrate CHRISTmas, not Xmas.
Posted by AnneDroid at 21:59