I don't impress me much. 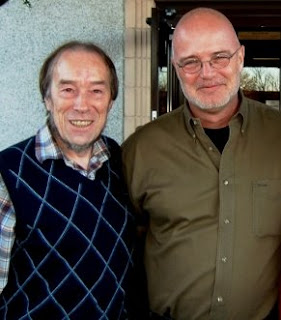 Brian McLaren and also John Drane spoke in our church on Friday, at an event organised by Fred Drummond , who happens to worship in our church.

That sentence, to some people I know, would sound like name-dropping. And yet to the VAST majority of people I know, it would mean nothing at all. I like that thought a lot. It reminds me powerfully that those of us who at least sometimes reach the "in" crowd of our bit of the Church, do well to remember that if we start to be impressed by ourselves, and the fact that we're in the "in" crowd, then this isn't really going to do anything for the world where we live, or the prison where we work! Much better for us to be scratching where the world itches, rather than re-arranging the deckchairs on the Titanic, to mix my metaphors ridiculously.

(It was a really interesting evening, I should state for the record, and I will now make the effort, seriously, to read Brian McLaren's books. I'm very pleased to have been there).

But my point in this post is that people can become Big Names in the Church, and it's not necessarily because they've sought it. All those I just mentioned are to my knowledge, delightful and humble people. But because what they have to say is important, and they are prophetic thinkers in this generation of the Church, their audience has, most deservedly, grown over the years.

And yet, I, and THEY, know very well that our church credentials aren't worth much and indeed can be an absolute danger in terms of puffing us up with misplaced self importance.

One of my favourite "books" in the Bible, really a letter, is Philippians. (I partly like it because it's so incredibly cheery despite being written from prison). A bit of it is particularly relevant here. Paul is the writer and he is aware that his religious credentials are second to none, and yet he consigns that thought to where it belongs as you'll see. I like to read it sometimes and reset my default settings. I am a minister, my husband is a minister, my dad is a minister, his brother (my uncle) is a minister, my much beloved late great uncle (my mum's uncle) was a minister, and his maternal uncle was also a minister. Will that impress God? Nope. Will it impress my friends, neighbours, or the prisoners? Nope. Will it, in the end, get me anything other than the risk of misplaced smugness? Nope. (Btw, now I've gone and got Shania Twain's "That don't impress me much" in my head - it'll keep me awake...).

I really love what Paul says. Here it is in the Message translation:

"We couldn't carry this off by our own efforts, and we know it—even though we can list what many might think are impressive credentials. You know my pedigree: a legitimate birth, circumcised on the eighth day; an Israelite from the elite tribe of Benjamin; a strict and devout adherent to God's law; a fiery defender of the purity of my religion, even to the point of persecuting the church; a meticulous observer of everything set down in God's law Book.

The very credentials these people are waving around as something special, I'm tearing up and throwing out with the trash—along with everything else I used to take credit for. And why? Because of Christ. Yes, all the things I once thought were so important are gone from my life. Compared to the high privilege of knowing Christ Jesus as my Master, firsthand, everything I once thought I had going for me is insignificant—dog dung. I've dumped it all in the trash so that I could embrace Christ and be embraced by him. I didn't want some petty, inferior brand of righteousness that comes from keeping a list of rules when I could get the robust kind that comes from trusting Christ—God's righteousness.

I gave up all that inferior stuff so I could know Christ personally, experience his resurrection power, be a partner in his suffering, and go all the way with him to death itself. If there was any way to get in on the resurrection from the dead, I wanted to do it".
Posted by AnneDroid at 22:10

I love Philippians too.

And I love the perspective you bring to this post.

Isn't that guy on the left from 'planet of the apes'?

And this relates to all walks of life.
I see and hear of so many choosing paths for all the wrong reasons.
This is a wonderful post, AnneDroid. Thanks.

Your BLOG was been nominated...

Hello,
Do you think you have the best police related blog, or you know someone that does? Well here is your chance to have it voted on! I have put together a new blog, where I will compile a list of police related blogs, then I'll narrow the list down to the top 10, then have the readers vote on them...
This is a great way to get new readers to your blog and have a little fun!
Please visit the site and participate!

I live in a world where people name drop all the time. The problem is that they drop all the wrong names. They also would have no idea who someone like Brian McClarren is. Unfortunately they also don't much care for concepts like "generous orthodoxy". For me this is the over riding principle that keeps my involvement with the church.

The only thing I can't tollerate is intollerance!!