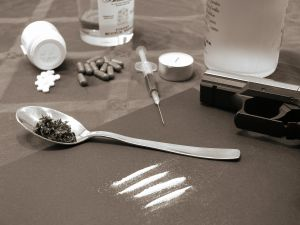 A policy I've adopted since I became a prison chaplain is that I don't allow prisoners to call a person who is addicted to drugs a "junkie".

In the Chaplaincy area of the jail, I have always told them, different rules apply.  Prisoners can swear  and curse to their hearts' content in my presence and I don't tell them off, even though I don't like it personally.

But, I tell them, when a person crosses the threshold of the Chaplaincy facility, they leave the "them and us" culture of the prison behind and enter as a human being.  I don't care, I say, if the person who comes in is a prisoner or an officer, or even if he's the governor, he is first and foremost a human being, and someone whom God loves.

For this reason, I have outlawed the word "junkie" from my presence.  It seems to me that if we label someone in this way (and the common adjective accompanying that label is "useless" - a "useless junkie") then this may become a self-fulfilling prophecy.

It's well known that if we label people with negative terms then their own sense of identity will be reinforced as being that negative thing, without much hope of improvement.  That's why parents and teachers are told to refrain from saying "you are bad" and instead say "that was a bad thing to do", as well as to lavish praise and encouragement when the child is trying hard/ doing well.

I'm pretty sure I still think this, but I was made to re-think it recently.  A prisoner I challenged over his use of the word "junkie" took me up on my challenge and engaged me in debate about it.  His argument was that the devastation and havoc that drug addiction bring to an addict and (arguably more importantly) his family and society are so massive that that he must not be allowed to get away with thinking his state is milder than it is.  He must realise how low he has sunk if there is to be any hope of his wanting to change.

This is interesting to me because something in it rings true in spite of my previous certainty that my attitude was the noble and Christian one.

And, as I write, I'm thinking of hearing the American evangelist Billy Graham preaching in Wembley, Parkhead, Murrayfield and Pittodrie two decades ago and being struck by how his popularity was surprising given that he basically, from the Bible, told the crowds in each venue how sinful they were, and how lost they were without God.  You might have expected them to run him out of town but, no, many of them came back the next night and brought their friends!  But he was scratching where it itched.  People need to be confronted with the truth even if the truth is unpalatable.

And that immediately leads me to think of Jesus in this great story:  http://www.biblegateway.com/passage/?search=John+4%3A4-30&version=NLT.  He doesn't miss and hit the wall when he tells the woman how sinful she is and yet she goes and gets her friends to come and meet him!

So, then, what is my conclusion?  Am I going to start allowing the word "junkie" to be used by prisoners in the Chaplaincy?  I'll need to think about that some more.  Feel free to give your opinion.

Can NEVER get past the infernal 'prove u r not a robot' thingamejig!!! Grrrrrr

I know someone who consumes alcohol to excess, with all the detrimental effects that has. But until he admits that he is an alcoholic, and builds himself up from the bottom then the term alcoholic when used to refer to him would be considered abusive.

In my opinion, "junkie" could be argued to be the same. Yes, it is a term of abuse, but for someone who realises they have a problem, then it's a starting point to build up from. I have more of a problem with the word "useless". I'm not going to challenge someone who calls themselves an alcoholic or a junkie, but I will take them to task if they call themselves useless.


P.S. re the last post. Keep the blog going please!

I think it's all about intent. If you are using it to describe someone, in the same way as you may described someone as tall or fat or a minister, it is a statement of fact. When it is used to demean another human being and take away from them that essential fact (often, as spot has pointed out, prefixing the dreogitory term with 'useless'), then it is no longer acceptable.

But, if the arguement that pointing out anthers flaws is necessary for them to change, what's wrong with calling them a drug addict, rather than junkie? Both describe the same (generally) concept, but one states a 'condition' (and I use that very resevedly), while another is more a label used to put others down. Putting others down will never make them want to change their ways. So, no, I do not think junkie is an acceptable term.

PS Keep blogging. Twitter's alright, but it's not possible to get much depth with it. I mean, you couldn't post stuff like this on it!

I wondered if there was a way of getting in contact with you? Was wondering if I could ask you a few prison ministry related questions?

I totally agree with Mrs. Gerbil.