You can never have too many brothers and sisters! 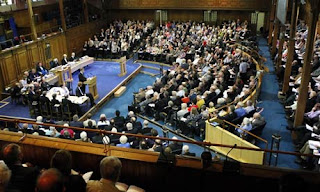 This week I've been commuting to Edinburgh to the Church of Scotland General Assembly, which is our annual week-long business meeting (with breaks to eat and sleep of course).  A quarter of the denomination's ministers attend each year, and this is my third assembly in the thirteen years since I was ordained, since I had a bit of time off for childbearing/childrearing/good behaviour.

Him Indoors, who is also a minister (not in Prisonworld but in a local church congregation) has also been attending this year.  It's been really lovely to be there together.  After nearly eighteen years of marriage I still quite like being with him... which is good.  :)

One of the lovely things about the General Assembly is that you get to see friends you haven't seen for a while.  That's important as well as what happens in the actual debating chamber.  We all need fellowship and encouragement.  I love my (biological) brother (and my lovely brothers and sisters in law) very much but it's a wonderful thing as a Christian to be part of a worldwide family in which every Christian one meets is "a brother from another mother" and "a sister from another mister".  I've been a Christian so long that I can't remember anything else, but my hunch is that those who're not Christians just can't begin to imagine this brotherliness/sisterliness feeling.  It's great, and I've enjoyed that aspect of this week very much.

As to what's happened in the actual debates, that's important and I'll come back to it in the next couple of days, but meantime I just want to give thanks to God for the encouragement it's been to see friends I haven't seen for ages, and also that I've made a bunch of new friends too.  By tomorrow that may include the waiters and waitresses of JimmyChungs at Waverley who have benefitted a lot from the presence of some of us this week!