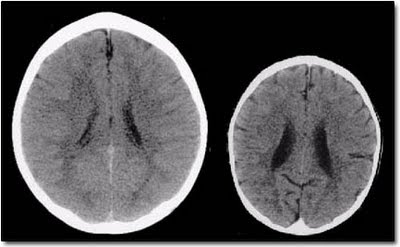 I was shocked by the contrast in these images. I hadn't realised that neglected children were affected mentally in a literal, physical, neurological way by what had happened to them. I suppose I vaguely imagined their main problems were due to bad example and lack of love and so on.

The poor little child in the slide is an extreme example, admittedly, but the truth is that there are actual neurological consequences to neglect in children. In particular, there are fewer connections in the brain than there should be, and the bits of the brain that enable us to understand where other people are coming from, to have empathy, to have sensitivity to the complex feelings of people around us, don't get the chance to develop very well in the neglected child. These children are therefore biologically more likely to end up behaving in an anti-social manner in the future as they don't understand the effects on other people's feelings of their actions.

I want to encourage anyone who is involved in working with young children in any way that all the time you give is worthwhile. I used to be involved as a volunteer in helping to run a parent and toddler group and my really wonderful friends Gillian and Norma are faithfully still involved, and have been since their own fourteen year olds were babies.

These early years are so critical.

This is a concern to me in Prisonworld too. It seems to me that huge resources should be devoted to parenting classes for prisoners (and perhaps their partners too, in some circumstances). So many of our prisoners had really appalling childhoods, as the children of alcoholics, drug addicts, neglectful or abusive parents. Also, many were in care as children and/or are the sons of parents who were themselves in prison. I have heard some stories that are so horrendous I nearly wept to hear them.

We need, as a society, to do all we can to break this dreadful cycle.

But cynically, I suspect that the problem is that there are no votes in this. It's too long term, isn't it? It's about sowing seeds now that might bear fruit in eighteen years. In party political election terms, that's too far in the future...
Posted by AnneDroid at 21:48

Bravo ... well said .
Don't be too cynical though folks eyes and ears are being opened .. just take's time.Frustrating yes, many of yesterdays and today's children have been ignored, unheard is it little wonder that society is they way it is now.
I think we all need parenting classes I know I have learned a lot in recent years through the amount of counselling I have had. Heartbreaking to learn that we as parents can and do damage our own children.Can I suggest reading about Trauma and the body gives a good insight

Just goes to show how important the early years for children are.

Unfortuneately, I think you might be right about lack of investment, I hope not though. After all, society reaps what is sows.

I deal with middle school students (grades 6-8) who have various emotional disabilities. Most of them can't see beyond what they want to do and don't think of the consequences. Something definitely needs to be done in the early childhood years, because by the time they get to us, there is only so much we can do.

Co_heir, that's my understanding too. Yet we have to do womething about the dysfunctional adults, or at least intervene to stop the next generation of these families going the same way.

Good one on Get Out of Jail Free and it helps a lot.

the content of this blog http://todayscliche.com/. Because I did and hope you would love too.

You have a nice blog. Keep up the good work.

That is very nice information, I will add I did the same thing whilst I had the same dilemma like the guy who is speaking.http://www.hotelsrome.net/hotels-near-termini-station.html