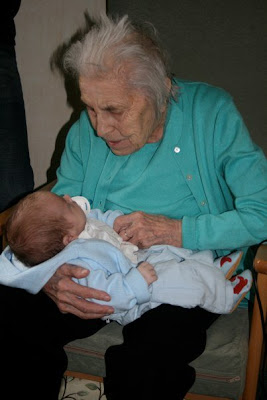 I've sort of lost my blogging mojo recently, though I think only temporarily. But I've just been driven back here to post this photo, freshly nicked from my brother's wife's Facebook photos.

In the picture are two very special people we're delighted still to have with us. My gran was 102 back in April. And my little nephew (her great-grandson) was really about as ill as you can get after he was born in July, but is now absolutely thriving, as you can see.

We are so grateful as a family for all the prayers for Miracle Boy. Some of the prayers were from pray-ers who've never met me but who read this blog and that meant a huge amount to me. I was also very touched by the fact that one of the people praying was a former prisoner, who is a Christian. He not only was praying himself, but had contacted his mum, who lives about 400 miles away, and is also a Christian. She had got her whole church prayer group on board as well, praying for the nephew of someone she had never met.

Prayer works, I have no doubt. Well actually quite often I do have doubt, when it comes to the crunch, and I'm mid-panic, but when I'm, as it were, in my right mind, I really do believe in prayer. From experience.

I know prayer's not a magic wand. God isn't a fairy godmother there to do our bidding and sometimes the answer is "no" or "not yet" or "yes but in a different way from you were thinking", but God is good, and he answers prayer, often with a simple "yes". What I never doubt, though, is that he's always infinitely more ready, willing and able to answer our prayers than we are willing to make the effort/take the time to do the praying.

To those who've prayed for Harry, I just want to say thank you, absurdly inadequate though those two little words are.
Posted by AnneDroid at 23:05

Oh, thank you for posting this photo. It is so priceless.

And it's so great that Harry is doing well.

There is a great (reminder) message there for us. Thank you, A-D.

I think great-gran is pretty miraculous too!