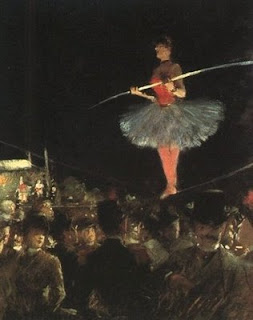 I'm saying this to explain why I've not been posting much lately. I've not stopped thinking and reflecting about Prisonworld and I'm still as passionate about guys getting out of jail free, truly free. However it so happens that most of the things that I've been thinking about or have been happening in recent weeks have been stuff I can't blog about in this public forum. I'm keen with my minister hat and my blogger hat (that's three hats I'm claiming now) to talk about prisoners at every opportunity. I'm keen to raise awareness of them in the public mind and in particular in the minds and hearts of people in the Church. But with my civil servant hat on there are obviously things I can't talk about in this arena. So I've been keeping a low blogging profile. 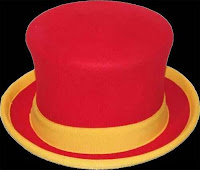 In Churchworld, there's been a big stooshie in the Kirk and I can't talk about that either as there's a moritorium on public comment at the moment. I'm really pleased that is so as there had been a most unedifying "debate" ongoing through the press which had been very unhelpful. Openness is a good thing but no one wants to watch someone else's dirty washing being washed. So I'm glad to say nothing on that subject.

All that makes for a boring blog though I will have stuff to say soon.

I do have a fourth hat (I'm going to stop this post before I think of any more hats and start to feel overwhelmed) which is family life, and that's such a blessing. The ongoing splendid and delightful pleasure and privilege of watching them grow is fun. Up here on my tightrope I have a really clear view of them all.
Posted by AnneDroid at 22:54

And a good juggler!

How about developing a ventriloquist act, then it wouldn't be you that said anything :)

Hahahaha. Brilliant, UHDD.
Yeah, Dickiebo and UHDD, perhaps I'll form a one-woman circus. The clown thing is my default setting and shouting at the kids has given me a ringmaster's voice too!

Hi AnneD; it's me again, back, and i do feel for you in the present situation. i'm writing again after two months of block. Don't give this blog up please; many of us are finding your reflections helpful.

Sounds like quite the rock and a hard place you are in these days. Do what you have to, and when you can get back to regular blogging, we'll still be here...unless we've run away to join the circus... ;-)

Thank you RD. That's such a kind comment. Your joke over on your blog about the ancient primate made me laugh a lot!

Oh and thanks Mr N - we cross posted there.

"In Churchworld, there's been a big stooshie in the Kirk and I can't talk about that either as there's a moritorium on public comment at the moment."

Thinking of you as you tightrope your way through.