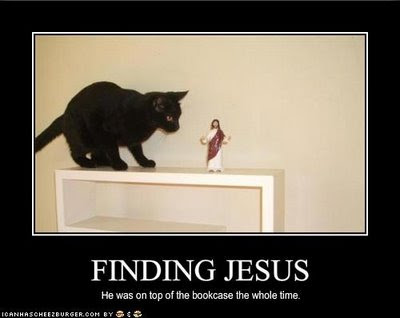 This picture makes me laugh. It's funny. That's why. And of course the relative sizes of the cat and "Jesus" make it funnier. One of my chaplaincy colleagues in another jail is fond of remarking that he doesn't "take Jesus into prison" as people are fond of suggesting, sometimes in a bizarrely starry-eyed way. Jesus is quite able to make his own way in thank you, and indeed was in there long before any of us mere human chaplainy-types.

And Jesus doesn't need "finding". He's not lost. We're the ones who need to come out of hiding, realising that with him, hiding is like standing on the other side of a big glass patio door and expecting not to be seen. Or like a baby who hasn't realised that when he puts his hands over his eyes and can't see you that doesn't mean you can't see him.

Also on the subject of finding, my devoted fans often ask how I come by the blogs on my blogroll. That's a lie. One person once asked me that.

Usually, as fellow bloggers know, it just builds up over time, as you check out blogs after reading comments on your own or other blogs.

Today a new find though, and a slightly different story:

Someone who works in one of "my" prisons asked if I would be available to conduct her sister's wedding in a local hotel, as they were needing an officiant. I gave her my work and home email addresses to pass on to her sister. I was having a senior moment at the time, because I gave her the wrong home email address. My home one ends "dot-co-dot-uk" but I put "dot-com" instead. Later on I got an email from the owner of the email address with the "dot-com" ending, pointing out my error. Her email included a link to her blog! I've visited it and added it to my sidebar. It's called "Telling Stories and Learning Faith". As well as having a similar email address she is also, like me, a minister married to another minister. They live across the pond from me, in Americaland.

It is from her blog that I nicked the picture for this post.
Posted by AnneDroid at 19:10

How wonderful to find a new friend that way! I bet you become friends.

Love the picture, too! And your introductory paragraph. It always seemed a bit arrogant to me to be saying 'I found Jesus', when clearly, if it happens at all, it would be the other way round - you'd just have to take your hands from your eyes. LOL!

I've seen the photo on another blog. It is hilarious.

What an amazing 'coincidence'!

Greetings from this side of the water!

yes... i am a friend of revanne's from across the water... hello to you! what an amazingly funny story to share...

Thanks for visiting my blog; in turn I visited yours and what an interesting blog it is.!

Taking and finding. We need to be reminded.

"Finding" is challenges in life that can be scary for some or exciting and rewarding for others.
I enjoyed this post, A-D.
(I'm glad you had a great 'find' on Fri.)