We're all different. My branch of different is this:

How to Hide Jesus by Steve Turner

There are people after Jesus 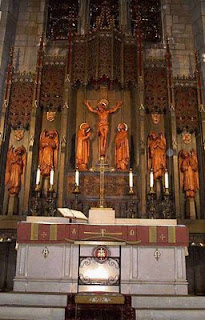 They have seen the signs.
Quick, let’s hide Him.
Let’s think; carpenter,
fishermen’s friend,
disturber of religious comfort.
Let’s award Him a degree in theology,
a purple cassock
and a position of respect.
They’ll never think of looking here.
Let’s think;
His dialect may betray Him,
His tongue is of the masses.
Let’s teach Him Latin
and seventeenth century English,
they’ll never think of listening in.
Let’s think;
humble,
Man of Sorrows,
nowhere to lay His head.
We’ll build a house for Him,
somewhere away from the poor.
We’ll fill it with brass and silence.
It’s sure to throw them off.

There are people after Jesus.
Quick, let’s hide Him.


I love this poem. It says what I think, and how I feel. Once upon a time, when I was chaplain in a cancer-care day-centre, though that's not relevant to the story, I was invited to a lunch at a volunteers' trainer's house. We were all asked to bring a poem with us. Being the chaplain at the time I thought I'd take along this one which expresses how I feel about some church stuff. I went in full confidence that I'd be the only clergy person there. However, to my surprise an Anglican bishop had been invited. I'm not sure that he shared my enthusiasm for this poem. The Anglicans have a name for folk like me - they call us "low church".

Now that I've matured/aged, I get it that we're all different. I really do. Smells and bells (as we're inclined to describe "high church" rather cheekily) just do it for some folk and - now - I totally accept that. Robes and cassocks do it for some clergy and congregations and - now - I totally accept that, although I'd rather die than wear them myself. I think God made us all different because our different ways of doing church express different things about who He is. He's too BIG for us to grasp everything properly. So some of us, I reckon, are charged with the responsibility of emphasising and understanding His holiness. Some His awesomeness. Some His approachableness. Some His miracles of healing. Some just the sense of the numinous. Some major on preaching. Some on worship. Some on formal ceremonial. All these things express something important. It could be argued that the ideal would be a perfectly balanced ecclesiology that reflects every aspect of God. Certainly that's worth striving for, but I don't think, tbh, God's that fussed about achieving unity in the sense of union of denominations. What matters is that we can WORK together and just get on with it! Squabbling over minor differences is like rearranging the deckchairs on the Titanic.

The emerging church movement is asking really great questions of the institutional church at the moment. There are some very good questions to be asked back though. In the end, what will count is if we all stop looking at each other and working out how exactly all our fellow Christians should be labelled, and just march forward together. As I've mentioned before, working ecumenically outwith the traditional church structure has shown me just how quickly the regimental colours fade into irrelevance when we're on the front line together.
Posted by AnneDroid at 22:05

Amen! God is teaching me the necessity of accepting my brothers and sisters in Christ regardless of how they worship

I actually rather like bells and smells myself...however, my late husband always said God is to be found at the top of a tree (he was a tree surgeon) more readily than in a church. I don't think it matters how you get there, so long as you do...He was raised in a very strict church community and he had an aversion for the in politics of congregational life, but he had a great relationship with God

I'm with you Anne. It's the old adage...when we were young we knew everything and as we get older, we realize we didn't know much at all. It's so easy to put God in a box with the "knowledge" of Him that we have at particular times in our lives, and criticize others who, in our opinion, don't relate to God in the correct way - our way! When I look at the stars at night - thrown against the backdrop of the sky, I get an inkling of his vastness; the vastness of his love, the vastness of his grace. My understanding of Him is so, so limited but as always, his Word reminds us that his grace is sufficient...

beautiful, profound and sad poem.
i like what you say. it makes a great deal of sense.

I guess that the real irony is that I was criticised at vicar school for preaching in a pair of combats and a metalica hoodie :lol: !!

Robb - three cheers for combats. I wear mine a lot to senior management meetings as it helps me feel I'm not "one of the suits".

PS Caroline. What an interesting job your late husband had. I love to watch tree surgeons in action, although I'm too prone to vertigo ever to have been one...

The best part Anne...
the best part,
is that you can allow the others to have their way. :)

This was very good for me to read.
Thank you.

And I am glad people still post, even when I barely do. :)

I thought that pom was so sharp. I may need to read it on a weekly basis.

I knew what you meant, D-P!

I so enjoyed how you wrote this, spelling out not just the differences in your profession and teachings of God..but how it crosses into acceptance of all mankind.
I truly enjoyed this, Thank you!
Barb

I recently came across your blog and have been reading along. I thought I would leave my first comment. I don't know what to say except that I have enjoyed reading. Nice blog. I will keep visiting this blog very often.