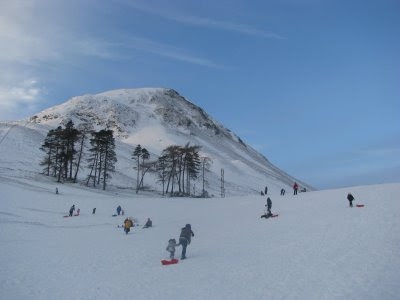 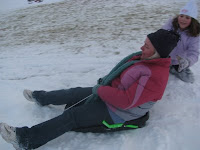 The kids and I had lots of fun this afternoon when we took the sledges up to Glenshee. Even I, in spite of my love of being warm, clean and dry at all times, had a couple of goes. The reason I look even cuddlier than normal in this picture is that I was wearing nearly every item of clothing I own. I very nearly demolished a couple of three year olds that had made the mistake of standing in my way and also went over a ramp/jump that someone had made - accidentally as I didn't see it. Also at one point after falling off the sledge into some deep soft snow found I was almost entirely unable to get up because of all my layers rendering me as stiff as a board. On a previous occasion here Blue Eyed Boy cut his ear so badly that we had to drive to Accident and Emergency (to the grave annoyance of the other kids who hadn't even had their first shot on the sledge). No incidents this time, and it was worth the mountain of soggy laundry now awaiting me, definitely. 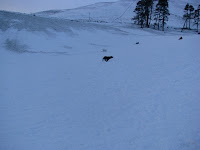 Even the puppy got out for a run about in the snow. She was moving way too fast for me to get a decent picture of her, and the light was fading too. As there were so many folk around she was stuck in the car for the first while but we'd gone late in the day, having been at church, so she got a good run around before we left. As soon as a child set off down the hill on the sledge she was after them. You wonder what goes through their heads: "What's this all about? No idea! But it's fun!" 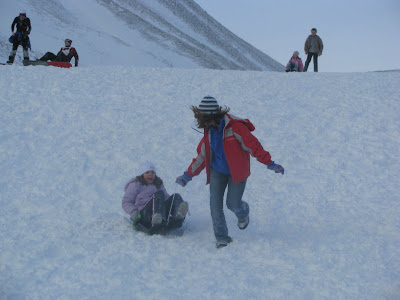 Yesterday, I had a completely different sort of experience - and not just because I was warm, clean and dry throughout. I was in Edinburgh at the Alpha Scotland Vision Day. I really enjoyed it. I've never been on an Alpha course, though I attended one session of one in a prison as I'm thinking of running it in "my" jails. It's been very effective in enabling the Christian faith to be shared in a very friendly, gentle, warm and natural fashion - there's prison Alpha, schools Alpha, workplace Alpha, youth Alpha, student Alpha and even hotel Alpha, as well as the local church ones. It was also really good to meet two fellow bloggers there, That Hideous Man , whom I DO meet from time to time, and Lynn at Help I Work With Children whom I haven't seen for more than two decades, and who, incidentally, was one of my mum's maths pupils at school. Perhaps I'll go on a world tour in search of meetings with all those whose blogs I read - tricky with some who don't give much away. First I should hire a private detective, I guess.
Posted by AnneDroid at 20:27

Looks like you had great fun in the snow - we hardly got any near us.

Re Alpha, I did an Alpha course in 2000 - one of the best things I have ever done. It was an interchurch course and was marvellous for local ecumenical activity. I remained involved with Alpha for about 4 years, on and off. A great way in. In retrospect, the big challenge has been keeping the initial enthusiasm going for a significant time beyond Alpha. But we have some really encouraging success stories locally.

looks fun. Too bad the snow can't come when the daylight hours are longer. :-)

Oh those snowy pictures look SO SO good! I am sitting at my desk just now but desperate to get out to the hills with the kids and the sledges.

It was a good day indeed on Saturday and it was great to meet you too. Can't believe you have four children and such a demanding job. Total respect.

Our dog regards people on sledges as sheep and they should all be rounded up with immediate effect, as this involves 'snapping at their heels' she is confined to catching snowballs

congratulations! this blog is very interesting and has information most important we invite you to visit our blog www.Costa-ricarealestate.com and www.costarica4retirement.com and you will find both. Prices will amaze you Great investment opportunity at Costa Rica Pacific Coast, costarica real estate ,

Don't go to Costa Rica. We need you here.

You can visit us any time!

Thanks Connika! And the invitation is reciprocated of course.

So much for a sprung spring :D

Congratulations! this information it is very interesting, I invite you to visit my site about Costa Rica Real Estate and Retirement in Costa Rica and you will find both. Prices will amaze you have a great investment opportunity to invest in Costa Rica Pacific Coast.
Visit us for more info at: http://www.Costa-RicaRealEstate.com